This website does not fully support Internet Explorer. For a better experience, please consider using a modern browser such as Chrome, Firefox, or Edge.

Capitol CMG and Grammy-nominated artist, Jeremy Camp, will take his honest, soul-bearing live performances on the road this fall with his “I Still Believe” tour. Featuring hit songs from his first album released in May 2019 (“Dead Man Walking,” “Still Alive” and “Keep Me in the Moment”), along with his new music from his “Speak Now” album. Concert goers will also experience a night of worship, thanking the Lord and learning to persevere in the midst of trials. With more than five million lifetime albums sold, four ASCAP “Songwriter of the Year” awards and 41 number one radio hits across all formats, Jeremy Camp might be best known for his fan-favorite live concert events – and the “I Still Believe” tour promises to be no different, with performances by special guest, Katy Nichole.

Get your tickets today! 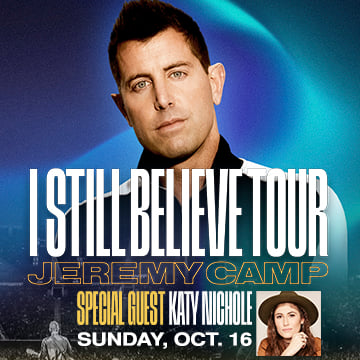